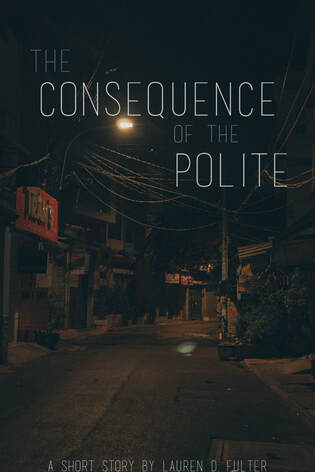 The Consequence of the Polite
Lauren D. Fulter

He didn’t want to be there.
He didn’t belong there.
He sat outside in the cold, lonely darkness, trying to block out the echoes of the shouting and music, and the putrid, nauseating smell of smoke that forced him to breathe through his mouth.
No one would notice him.
A sixteen year old boy huddled in the shadows of the bench. A drunken man, his own cigar the source of the mell, sat on the bench, oblivious to the one who hid, just scrolling through his Comm without a care.
The young man’s own Comm was dead in his pocket. He hadn’t had time to charge it.
He hadn’t been allowed.
The door slammed out, a group laughing and jeering as they stumbled their way out.
Teenagers, much like himself.
A group of them, their colored hair, cheap skimpy clothing radiated their ignorant youthful sense he hoped would quickly leave him alone.
But of course, they lingered.
They were at most ten of them, and the loudest, a girl with short cut, sleek black hair. Her words were a hump and inaudible to him, but the group found her hilarious.
The smoking man even got annoyed. He rose to his feet, jeered a rude comment to them, and stormed off.
The group began cursing after him, and laughing.
“They expect so much,” the girl said, tucking her hair behind her ear with a scoff. “Let ‘em die.”
The others agreed heartily. A loud thud awoke the young man’s senses. One of the smallest members of the group had been pushed back, stumbling backwards onto the ground.
A girl.
Barely even a teenager.
Her body was shaking, her eyes searching around desperately. She looked terrified. Scared.
He instantly knew she didn’t belong.
He scrambled to his feet, offering the crawling girl his hand.
Her eyes narrowed, trying to decipher him.
Slowly, she clasped her hand over his, letting him guide her to her feet.
She was fairly young. Not much older than another child he knew. She wavered a moment, but suddenly froze. He looked up and saw why. The dark haired girl’s eyes bored into him
The younger girl squeaked, and hid behind him.
“Aren’t you Aguirre’s son?” she snickered.
He nodded, urging his voice to remain steady. “I am.”
She rolled her eyes. “I’ve heard a lot about you” she said, moving through her peers, who jumped back as she strode forward.
“They did say you looked peculiar,” she said, with a raise of an eyebrow. “But I’ve heard other things too.”
“Good things, I hope.”
She shot him a glare. He could only manage to restrict his smirk to a tiny smile.
The girl glared at the child who hid behind him, who released a terrified gasp.
“I see you’re a gentleman.” She said the word with such disgust and ridicule, anyone would have thought she might have been accusing him of a crime.
A few laughed.
She took another step. “You are all prim and proper,” she said, heightening her voice. “But you aren’t going to go around here with your manners and gentle act.”
She glared at him.
He held his face steady.
“You still think the nice acts are going to work?” she scoffed. “Look, kid. You’re like a rule follower. Might as well be an old man.”
“Jea-”
“Shut up!”
The younger girl closed her mouth.
“There is no need to get aggressive. I’ve never hurt you-”
“Oh! And the humble act! People like you are so irritating! We’ve evolved past virtue, believer.”
She laughed. The others laughed with her.
She couldn’t have realized how cruel she sounded.
He raised his eyes to meet hers. He felt humiliated, but he was used to it. He didn’t let her comment show.
“Look, I’m helping you,” she said, crossing her arms.
“You’re offended by my values.”
She ignored him, “Look. If you want to survive you have to change. Rebel up a bit. We’re here for justice. Equality among the classes-”
“If this is your change, I want no part of it.”
Almost as soon as the words escaped his lips, he was hit in the gut and slammed to the ground. He didn’t fight her.
Better him than someone else.
She rose , spitting. He watched the pain and turmoil  flicker in her eyes as she turned.
“This is what you get for your traditions, believer.”


Featuring Characters From "The Unanswered Questions" Series. Coming This Winter.