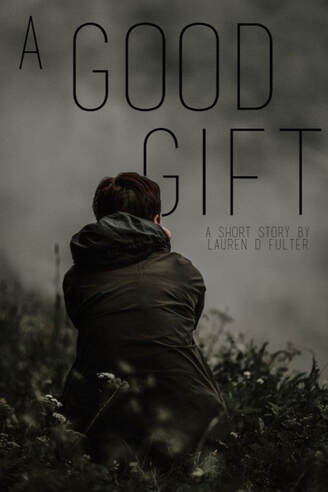 He slipped through the loose chain link that had long separated from the rusted pole, with ease. He ran down the narrow alleyway, his head held high with a sense of confidence. His bare feet were silent against the stone ground, and were numb from the cold. He avoided a dirty puddle and quickly found the restaurant's alley incinerator dumpster.
The little boy smiled to himself, quickly slipping in the gap between the incinerator and the wall.
Heat radiated from the machine. He bit back a sigh, pulling his legs to his chest, curling into a tiny ball. He nearly jumped when he caught the shimmering eye of another creature, hidden beneath the incinerator. It was deathly still, but the slow beating of it’s tiny, furry body indicated it’s life. They stared at each other, neither of them daring to move.
Shouting tore through the silent air followed by the thunderous echoes of footsteps.
The little boy squeezed his eyes shut, tightening his grip on his bag, as his fingers dug into the fabric.
“I saw him turn here!”
“He couldn’t have gotten in there that fast,” another scoffed, followed by a deep, frustrated sigh. “Keep looking.”
The two sets of footsteps trudged off, and the little boy managed to relax a little.
Those ones at least had been nice.
He uncurled himself, adjusting his frail frame to a hunched sitting position against the machine, taking in the warmth that thawed feeling back into his finger tips. He unbuckled his bag, removing the napkin folded tightly around the crumpled piece of bread.
He wasn’t in the slightest bit hungry.
His mind was reeling, his hands trembling with adrenaline.
A rustling noise brought his eyes up. He saw the mouse creature freeze in terror, looking on the verge of jumping into a mad scramble to get away. The little boy stayed still.

“It’s okay,” he said, his voice quiet, and soft. He tore a small crumb from the food, and flicked it in the direction of the creature, who seemed to be beyond confusion.
But it didn’t run, as it’s beaded eyes looked up to the boy’s similar dark eyes.
For a moment, they were both still.
Then the mouse lunged for the crumb, and skidded from the corner in a shuffled hurry.
The little boy sat back, blinking a few times, before his thoughts aligned. Every time it seemed it worked better with a creature. One without a human face. People never listened. They towered over him as they passed by on the streets, their colorful faces never having a pattern.
The human race was unpredictable.
And he hated it.
He sighed, getting up from his hiding place, he wiggled his way out back into the slim alley way.
“Gosh darn it! It’s gone out again!” A metal bang echoed through the alley.
The little boy froze. A large man stood by the heating panel attached to the beck of one of the buildings. He wore a black apron, black grease stained his arms, rubber gloves tucked into his back pocket. He kicked it, the machine shuddering. “Going to have to call a third time this month!”
The little boy jumped, his elbow grazing a metal incinerator.
The bang echoed.
He cringed.
The man whirled around, his eyes widening on seeing him. His expression fell to a curious frown. His eyes were a soft brown and stern, concern was etched in his face. “How’d you get back here?”
“T-the fence.”
The man looked to the fence and then back to the little boy. The little boy saw his hand hover toward the Comm ledged in his belt. “How can you-”
The little boy burst from his hiding spot. “I can fix your heater!”
The man’s face softened with a sigh. He shook his head. “No. You can’t. Now-”
“Just let me try!” the little boy begged, taking a bold step forward, though he could barely keep his mind straight as he held his eyes up to the man’s.
The man gave a scowl, and a slight roll of his eyes as he crossed his arms over his chest. “Alright then, kid. Show me.”
The little boy breathed through his parted lips and moved forward to the panel. Unlike others he’d seen it didn’t have a holographic covering. An older machine. He glanced over his shoulder to man, towering over him, one of his dark eyebrows raised in suspicion.
The little boy plopped down, crossing his legs and getting to work. He quickly found the source of the problem. It was an interior malfunction. It was only slightly frozen from being turned off for the night.
The region’s brutal winter weather.
He pulled at the panel, budging it from it’s secure place in the wall. The man frowned at him.
The little boy laid down on the wet ground, his hands busying themselves until he connected what he was sure were the correct starting circuits. With a bang he heard the machine whir back to life.
He sat back up, brushing his dirty hands off on his pants, and looked back up to the man.
The man’s lips had parted, astonished. He didn’t move for a moment, before blinking and burst back to life. “Where’d you learn that?”
His voice had grown warmer, and almost excited. The man’s face was now flushed with color.
The little boy held back a smile. “Myself,” he said, as he stumbled to his feet.
The man knelt down to his level. “Can I get you anything?” His eyes fell from the little boy’s face. “Food, maybe?”
“No, thank you, sir.” He already had his loot.
But the man pressed on, with a laugh. “You saved me another check out to that mechanic. Come on, it’s cold-”
The man stopped himself, grabbing the bag he’d been carrying from the ground, tearing it open. He pulled out a large dark green hooded jacket.
It looked to be in perfect condition.
“Take it,” the man said, holding it out toward the little boy. “Someone left it in the diner booth and never came back for it. It was going to go into the incinerator anyway.”
The little boy had been staring so long he’d forgotten to swallow. He took the jacket from the man’s hands. The gift was far too precious to resist. His hands clenched around the soft material, rubbing it between his fingers.
“Well,” the man said, with a raise of his eyebrow. “Put it on.”
The little boy eagerly pulled the jacket over his head. It was definitely a few sizes too big, reaching right above his knees, the sleeves drooping over his hands. But it was a sign it would fit for years to come.
The boy looked up, a smile bursting across his face. “T-thank you!”
The man smiled, getting up to his feet. “You are very welcome.”
The little boy rolled up his sleeves, adjusted his bag, and gave the man a quick farewell. He ran to the fence, grabbing hold of the loose chain link and slipped through.
He waved back to the man, who just laughed softly, and gave him a small salute.
The little boy saluted back, deciding the world wasn’t all that bad.

Featuring Characters From "The Unanswered Questions" Series. Coming This Winter.